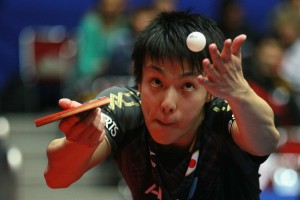 How to improve my table tennis serve?

The long, fast serve should be in every player’s repertoire. It’s surprising how many cheap points you can often pick up at vital stages in the game, with a sudden fast float or topspin. Last second changes in the bat angle can change the serve from fast topspin to float or even chop in a fraction of a second. The fast float played with an upright racket straight through the ball on a horizontal plane can be a particularly useful serve at all stages in the game. It is also easy to conceal the direction till the last moment.

Of course placement and length are important but variation can also bring good results. Many players don’t work enough at producing a variety of differing spins with almost exactly the same service action — sidespin, sidespin and backspin, sidespin and topspin or near float. Serves where the spin can be changed by simply using slightly closed or slightly open racket angles can be particularly effective, especially if executed with a very fast and short movement which gives the opponent only a fraction of a second to recognize what is happening and to adapt. The playing of table tennis is after all more than anything else a question of adapting one’s game to what the opponent is doing. If you can cultivate slightly different techniques then these are harder to adapt to, because they are not what the opponent is used to meeting and his or her conditioned reactions don’t work so well any more.

Equally table tennis is also about time, about how much time you allow the opponent to have to consider his or her actions — a very short distance between racket contact on the ball and ball contact on the table and fast, short service movements give the opponent less time. With very fast movements it is very difficult to see what is happening. The speed of movement usually increases from the centre of the body out to the extremities. It is difficult to see rapidly moving extremities or striking implements such as rackets. Movement observation can be simplified by looking at slower moving parts first.

It’s also important to use the various contact points on the ball, under, at the back and on the side, so you are in a position to vary the spin at will, with the same or similar actions. Don’t overlook the heavy chop and float serves initiated from a high throw – these too can be quite deceptive. 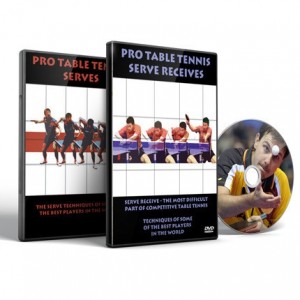 In case you miss it!

Subscribe to our blog to receive more table tennis tips!