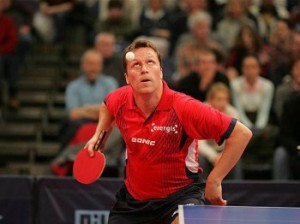 A Mental Approach to the Service Area

As you will know service is defined as striking the ball so that it first touches your side of the table and then passing over or round the net, bounces on the opponent’s side of the table. If you play the game to any standard however, you are aware that the serve has become much more technically advanced over the years and if you wish to remain truly competitive, it is no longer sufficient just to put the ball into play.

The whole area of service has to be considered in the light of a free kick in soccer, taken just outside the penalty box, where if you approach the kick with enough planning, deception and tactical awareness, you will be able to score a goal! Just as with the table tennis serve, the top players will have a number of alternative plans and free-kick variations to use, depending on how the opponents set their field to try and cover the goal.

So in table tennis the service is a prime opportunity to ‘score’, the first chance to win the point or to create an opening to win on the third or fifth ball. Why waste this chance by blasting the ball past the post – by serving off or into the net, or by giving the opponent an easy serve from which he or she can gain an advantage? The same applies to the old idea of neutrality in service. In the old days attacking potential was limited and you could be neutral with your serve, play safe and get away with it. Not any more! Nowadays with modern rackets and with strong second ball attack a common factor, being neutral or playing safe is not really a viable option. At the best it places you in the situation of struggling to win the point from a position of equality, when in fact the serve should be used to give you a definite advantage.

The prime factor to bear in the forefront of your mind as the server is that this is the one set piece in table tennis where the opponent has to dance to your tune. You are in the driving seat, you are in the position of dictating, you put the ball into play in your own time and you pick where you are going to serve and the type of spin and speed you are going to use. All the opponent can do is to use his or her experience to set himself/herself up in the best position to receive, but all the initiative is yours. I think most top players would agree that if one player were allowed the opportunity of serving all the time, games would be rather one-sided.

Just Think What Your Service Can Achieve.

If you are going to gain maximum advantage from the occasions when you have the serve, then from the outset it’s vital that you cultivate an ultra-positive approach to the service aspect, a total commitment to winning the point on the serve or on the third ball. Better to try to win the point outright than to be constantly neutral and safe. Note that I say outright and indeed this is how the serve should be regarded, as your first chance to win the point directly — not just conferring a tactical advantage enabling you to win the point eventually in the next half-dozen strokes. Set your sights high and don’t lower them. At the very worst your serve should present such problems to your opponent that you can comfortably kill the third ball.

The acrobat can attain pinpoint accuracy through hard training, why not the table tennis player? The answer lies in the fact that table tennis is an antagonistic competition, acrobatic performance isn’t. Every stroke you make is based on correct and split-second judgement of the incoming ball, which varies in a thousand and one ways. Service however is the one exception. Much remains to be exploited in the service area in terms of spin, speed and placement of the ball and different ways of striking the ball. Achieving results is largely only a matter of practice and being aware of how to use the arm and body and where and how to contact the ball, both on the ball and on the racket.

However this is not necessarily going to be either straightforward or easy. Raising the level of your technical expertise so it is on par with your determination will involve a great deal of hard work and application, both physical and mental and hours of arduous practice. You will have to be aware of and aware of the significance of, the conditions you are playing under. Aspects such as the speed of the table, the size of the court, the type of ball, the various racket combinations involved, the stance and receiving position and even the mental condition of the opponent, all require consideration. But there are certain factors which can ‘stack the odds’ in your favour!

Our second part will be “The Laws — Very important to know!”