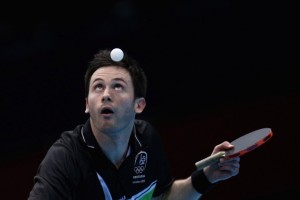 On our last article we talk about “The laws – Very important to know“, today we’ll be talking about the ready position.

Study your opponent and his ready position before deciding which serves to adopt. Many top players are masters of this technique. From any one service position you should be able to set in motion several very different serves in terms of spin, speed, direction or placement. Of course if you see your opponent moving at the last second, perhaps to play the forehand from the backhand corner, then you should change the serve accordingly. Equally if you see him settle in his position, it’s very easy to alter your own position fractionally, but just enough to obtain a rather different angle on his side of the table. Practice serving from differing areas on your side of the table so that you feel just as comfortable putting the ball into play from the backhand, forehand or middle.

You should of course be constantly alert to your own positional strategy when your opponent has the serve. Most of the best receivers move their position between the time the server throws up the ball and the split-second just after the ball has made contact with the racket. Bear in mind too that it’s not only movement from side to side which is important but also in and out. As your opponent serves closer or further away from the table you may well have to adjust your receiving position accordingly. Some receivers tend to stand a little back and jump in to take the serve, which can work to the server’s advantage if he or she serves fast, wide to the backhand for example.

Be aware too that in these modern times and with the increasing speed of our sport, a ready position and subsequent movement patterns which retain a square stance are not just preferable but essential.

So far what you think of this? Leave you comment…