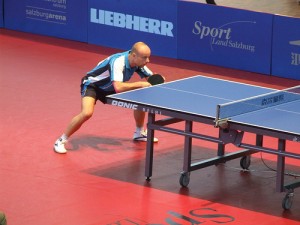 The Laws — Very important to know!

It is your responsibility to serve in such a way that you comply with the requirements of ‘a good service’. But also if you know the laws on service they will assist in protecting you. Is it legal for example for the opponent to start the serve from under the table, to shield the ball with the body or to move the table during service? If your opponent is faulted on his serve and the umpire’s attention is focused on him, this will curb some of his effectiveness and may prove to your advantage, possibly at a vital stage in the game.

Equally you can use the laws to your own advantage. You have the right for example to see both sides of your opponent’s racket, before he or she starts the match. Make use of this opportunity don’t throw it away. Seeing the opponent’s rubbers allows you to pick up the double-sided combinations, fast, tacky and long pimple surfaces. It allows you to use your own serves to maximum advantage. But also it assists you enormously in receive as you have a good idea what type of serve to expect from the differing rubbers. Once you have control of the serve and receive situation it’s much easier to work out how to use your opponent’s spin or lack of it and to take the initiative away from him or her.

Operating quite legally you can for example throw the ball high up above the lights in service, which may be of benefit against many players. Or you can hide the bat from the opponent, either under the table or behind your back so that he or she has as little time as possible to see which side you will use. This is often a big advantage if you have different rubbers on your racket.