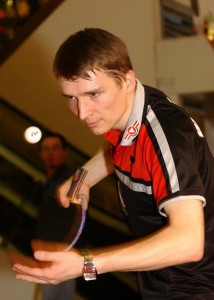 Most players who have had the opportunity of competing against pen-hold grip opponents will tell you that they are able to achieve a high level of spin, especially side-spin  Try a little experiment yourself — hold a pencil or a ruler in the pen-hold grip and twist your wrist rapidly from side to side. You will find that you achieve a very quick and natural spin swing just by using the wrist alone, even before you bring the rest of the arm into play. Also you are effective over a wide height range from almost shoulder height right down to your knees.

If you try to achieve the same action with the ‘ shake-hands’ grip and holding the racket normally, you find that because the forearm is no longer facing forwards but pointing down instead, your range of movement is limited. Any spin action is initiated more from a combination of wrist and forearm and the action of the wrist is rather different. The whole movement is in fact of most use to you down near the knees and as you serve from a higher level you are more and more restricted. As a result you try to bring in more arm movement to compensate for losing the wrist action. In other words you move away from using the fastest moving part of the arm to relying on the heavier, slower moving areas!

Of course the pen-hold spin action is also different, you have a much easier and more natural rotation of the wrist and also a longer movement. Even with the ‘ shake-hands’ grip where you only hold the racket between the forefinger and thumb, full rotation of the wrist is still not achieved and it’s more natural to bring in movement of the forearm. Also the whole range of movement is shorter. You can increase this and increase your effectiveness, by gripping the racket blade more out on the top edge instead of nearer the handle. THE THUMB SHOULD BE IN POSITION 2 RATHER THAN IN 1 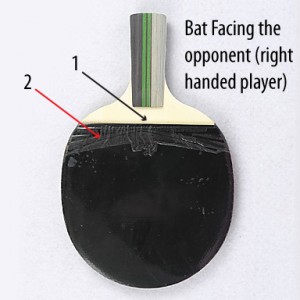 The forefinger of course must be in a bent or hooked position. You only bring tension into the wrist by trying to keep it straight.

A point to bear in mind with the ‘shakehands’ grip is that you have a larger variety of service actions available to you and you should take advantage of and build on this aspect. You have the axe and reverse axe serves and also the possibility of many variations on the backhand side. It can often be better with the backhand serve to remove the forefinger from the racket and to use the hammer grip — this gives rather more freedom of movement in the wrist and makes it rather easier to vary the racket angle at the time of contact with the ball.

You should also give more consideration to where you serve from. You should be prepared to serve at differing heights and at differing distances from the table. The whole idea of the same 16-centimetre throw, serving only from the BH corner, the whole predictability of the serve, has to be re-thought. The higher throw-up creates the opportunity directly of more variety, of more spin and a different bounce factor. It is important to experiment with differing grips, differing throw-ups and serving at differing distances from the table as well as placing the ball in varying areas on the opponent’s side of the table.

In case you miss it…