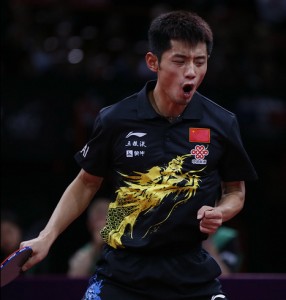 The most anticipated match in the 2013 World Championships, the Men’s Singles finals, took place today with familiar faces Zhang Jike and Wang Hao. Although they have encountered each other in three big occasions already, their battle in the French capital was still intense with both showing their brightest spots. After six sets, Zhang Jike overcame the mental stability of Wang Hao and successfully defended his title.

ITTF. The 2013 World Championships ended with the most anticipated match in the whole competition, the Men’s Singles finals. For this year’s battle, familiar faces Zhang Jike and Wang Hao showed everyone that they are still the men to beat.

For three times in a row, Zhang Jike and Wang Hao met each other in the finals of world competitions: the 2011 Rotterdam World Championships, the 2011 Men’s World Cup and the 2012 London Olympics. In all three occasions, Wang Hao settled with silver helping Zhang Jike to complete his Grand Slam.

Today, both players met each other once again for the fourth consecutive time for the 2013 World Championships Men’s Singles final. Before the competition started, Liu Guoliang challenged Zhang Jike for a second round of Grand Slam.

Well, in the opening set, there were chances for a positive answer as Zhang Jike had good control over the table and posted a comfortable lead of 8-3. In order to keep the pressure on the opponent, Wang Hao managed to save two set points. But efforts came late as Zhang Jike got the opening set with 11-7.

Although Wang Hao has settled for silver in the previous encounters, one cannot deny his stable performance yesterday against the supposed to be formidable Ma Long in the semifinals of the Men’s Singles. He nailed a 3-0 lead before winning the match.

Today, Wang Hao’s mental stability did not place his opponent at threat as he found himself down in 1-6 in the second set. However, with good techniques, Wang Hao came close in 5-6, then 8-9. Zhang Jike, on the other hand, remained composed and sealed his second big point.

With 0-2 deficit, Wang Hao finally recorded his first decent lead in the match, 4-1. Zhang Jike caught up but this time, Wang Hao wanted to make sure he gets through the set ahead. Indeed, he got set point advantage in 10-6 then immediately earned a set to his name.

Now, can Wang Hao maintain momentum until the end? At the start of fourth set, Wang Hao got good control with 7-2. Now as for the answer to the question, “not quite” as Zhang came closer and closer, even after Wang Hao used his timeout. It was 5-7, then 6-7. Despite challenge, Wang Hao was able to reach set point in 10-7.

According to Xu Xin, Zhang Jike is capable of producing big points especially in critical parts of the match and at this moment, the defending champion exercised such capability. He saved three set points and overtook to 13-12.

Zhang Jike had a strategy. He first called for a timeout then sealed the set to his name which was supposed to be Wang Hao’s.

Wang Hao now was in terrible danger being behind in 1-3. As an experienced player, Wang Hao showed his version of composure and successfully extended his lifeline. After winning the previous set, Wang Hao gained much more confidence and continued to control the match in the sixth set.

Meanwhile, as asked by Liu Guioliang, Zhang Jike surely had the desire to win this time. He levelled in 7-7 then overtook to championship point 10-7.

In Rotterdam, Zhang Jike ripped his shirt off as a sign of his victory. Today, Zhang Jike ran off into the audience and showed everyone his recognition to his supportive parents.