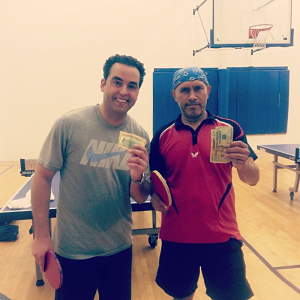 Last Wednesday on Newport Beach Table Tennis Club we got unbelievable battles among many players!

2 new table tennis warriors come to challenge his skills, Ray Shack and Luis Borges. Welcome guys and we hope you got a great experience on our Equal Challenge Tournament.

An outstanding match was Hashim Zaman versus Ron Arellano, both of them trying their best for the next round! Hashim won the first set with a score of 11-7, the second set won Ron with a score of 12-20, the third set won Hashim 11-6, the fourth set won Ron 12-10 and the fifth set it. ufff… what a set!

Both of them play at their best, but as everything has an end, after Ron won the tie 9-9, a high ball failure came, the score was 10-9. Ron serves, Hashim chop, Ron Chop, Hashim pop-up a weird under-spin ball to Ron’s backhand and Ron miss it.

Other exiting match on the single elimination round was Tim Stephens versus Hashim Zaman, what a rallies of this guys! Hashim with a great defense return as 4 times in the road Tim’s powerful smacks. Tim hit the ball hard as he can and Hashim seems ready to return everything.

Tim Stephen did not give up, he fought to the end, but the experience of Rudy Miranda from the Nicaragua National Team at the end dominated the game.

In other table Ron Arellano was playing versus Ray Shak, both of them looking to advance to the final. Ray surprise to Ron with his serve and a consistence defensive block in his backhand ending with a resounding 3-0. Ray advanced to the final.

Ray Shak surprise Rudy on the first points with his serves, but Rudy also surprise Ray with his serves and third ball attack. The 5 sets where tight, you must watch the video below. In table tennis a score of 8-8 or 9-9 anyone can get the victory.

At the end of the match Ray said “This round robin was very FUN! And I’ll be here next Wednesday”

We want to say thanks to everyone to umpire the matches, among all this table tennis warriors. Remember we have rules to follow in this tournament and we want to make sure all of you guys feel in a fair table tennis atmosphere. So who will be the next Champion next Wednesday? Leave your comments.