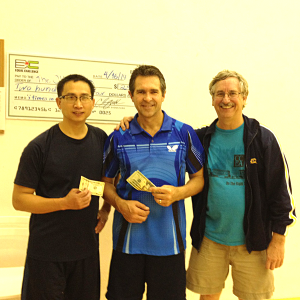 It was a great table tennis night last Wednesday in the Equal Challenge Tournament, and this Wednesday we’ll playing again at the Newport Beach Table Tennis Club.  Just make sure to arrive on time, for after 7 pm we cannot register any player.

A participation of 12 players made this tournament one of the largest ones in the area, with different levels, different styles but with an equal opportunity for all those who love table tennis as much as we do.

We also welcome Tony Yeh, Samir Rajput, Art Sandoval and Odeon DY. Thanks guys in your participation and to be part of this event!

With two groups of four players and one group of three players, just the best of each group advanced to the Equal Challenge Final

Match of the night

Odeon DY against Tom Yeh, and both of them were very focused on their shots, taking care to place the ball far as possible so they can get the points. In moments Odeon took the risk to attack an underspin ball, as some shots went in and some went out, but apparently this also motivated Tom to attack, and as a result Tom won one game.  The final score was 3-1 for Odeon.  Attacking doesn’t mean to finish the point at once, for we have to keep the rally and who has a better consistence will be the winner. Congratulation to both, as all the crowd saw your match.

Thanks to the Equal Challenge Tournament, we got again a final round robin between three players:

The three of them were past Equal Challenge Champions, so these matches got the attention of the crowd in the club. And the crowd was right!  Every single match got amazing rallies, great shots and serves.

With this result Tony is the New Equal Challenge Champion. Congratulations Tony!

Can Tony keep his title for this Wednesday?  Tony won the Equal Challenge Tournament three times in a row already, so can he make it again?

Come this Wednesday and challenge our champions, for the Equal Challenge Tournament is made for all levels.