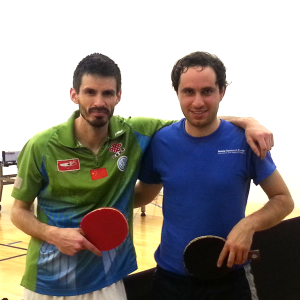 After a conversation of Madhi he understood the rules of the Equal Challenge Tournament, and he said

All the competitors were serious about their matches, no one can say got an easy match.

When was my turn to play with Hashim Zaman, we got a tight match, ask Hashim if you don’t believe me.

Hashim play at his best level, he never give up…we went to the 5th set and the score in that moment was 9-9, I think we play until 17-17…what a match! All the club was watching the match, it was very exited game. At the end I won with a topspin attach to his backhand…ufff! and we shake hands with Hashim.

When a match is so tight the winner can be any…I think if you are reading this, I don’t have to explain you what means a 10-10 in the 5th set.

Anyway, who was the winner last wednesday on the Equal Challenge Tournament?

Mahdi show our players the power of his forehand, and his tricky serves which I think give some troubles to everybody. We look forward to take a rematch with Mahdi

Wondering how we are doing? Come and play our Tournament and challenge your skills with other.