Tao Jiang Is Still Unbeatable in the Equal Challenge Tournament! 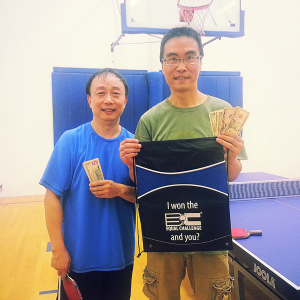 Extreme concentration is just one of the positive benefits of what the Equal Challenge Tournament can make for you. Playing with your five senses is key to beating  your opponent.

Last Wednesday we got the participation of 10 warriors with different skills levels and ages to improve their table tennis skills.

Lucho Soto and Luis Ramirez found a very fun and competitive environment for their first time.

“The tournament was very fair even if we did not advance past the first round.  The matches were very tight and when I was thinking it’s my set, it was not…next time I’m sure I’ll play better” said Lucho

Both of them were ready to play in the semi-finals.

This match was awesome with a lot of tactics including topspin and smashes of under-spin balls.  Fafa Liao was up (2-0), but then the third set was won by Tao.  For the fourth set, Fafa, with a score of 10-9, missed a high ball to his backhand ending in 10-10.  With this score Tao and his experience won that set.

Tao, like a Phoenix, had recovered, and in the fifth set Tao won with a score of 11-8, showing the public his skills under pressure.

Tim started the match by trying to put Tony under control with his spin game, but Tony with good block and ball control, placed the ball away and putting Tim out of position.  Tony defeated Tim (3-0).

Tony Su was in the final again and he was ready to take the Equal Challenge Championship this time.

It was a very exiting match as Tao started taking control by placing the ball with spiny deep loops.  Tony did not find a solution in the first set and in the second set, Tony tried to attack more but Tao was very alert, and led (2-0).

For the third set, Tony figured out what Tao was missing, and also Tao relaxed a little, resulting in a positive result for Tony (2-1).

In the fourth set, Tony took advantage of Tao’s relaxation and, like a Phoenix, he tied the match at (2-2).

Tao knew this was the last set, so he was very focused on the game from the start.  Tony was ahead 10-6, and just  one more point to win the Championship.  One more time Tao, with his experience, worked point by point until he tied it at 10-10.  Tony was in shock after this….for he was just one point away from that sweet victory.

Congratulations Tao, and players cannot wait to challenge you again next time!

See you next Wednesday and keep practicing!