Robot Learns to Play Table Tennis Like a Human 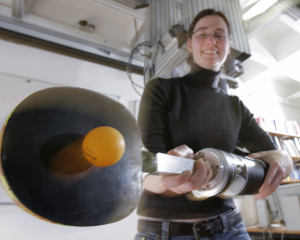 Tuebingen, Germany—A robot that learns to play table tennis from humans and improves as it competes against them could be the best robotic table tennis challenger the world has seen.

Katharina Muelling and colleagues at the Technical University of Darmstadt in Germany suspended a robotic arm from the ceiling and equipped it with a camera that watches the playing area. Then Muelling physically guided the arm through different shots to return incoming balls.

The arm was then left to draw on its training to return balls hit by a human opponent. When the ball was in a position it had not seen before, the arm used its library of shots to improvise new ones. After an hour of unassisted practise, the system successfully returned 88 per cent of shots.

Other robots have played table tennis in the past, but none have used human demonstration to learn the game. Ales Ude of the Jožef Stefan Institute in Slovenia says that doing so allows robots to play more like people.

The work, which will be presented at an AAAI symposium in Arlington, Virginia, next month, is part of a broader goal to develop robots that can do a range of tasks after being guided by their owners, Muelling says.