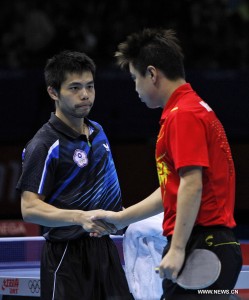 There is an established culture in table tennis and a set of rules that players should follow especially in tournaments. Following this table tennis etiquette will ensure your matches go over smoothly without conflict.

Apologizing for Nets and Edges

It is customary to lift your index finger as an apology when you win a point due to an accidental net or edge shot. Since the point wasn’t won due to skill, but rather luck, this is a suggested motion.

Celebrating these unfortunate points will anger a lot of players.

There is always debate around exactly how much celebrating is acceptable.

There’s nothing more frustrating than an opponent having an advantage over you gained by breaking the rules. Here are the most commonly broken rules.

The rule most often broken is when the player fails to toss the ball high enough before striking it. Simply dropping the ball or hitting it out of your hand is not acceptable and creates an unfair advantage by making it easier to generate more spin.

When tossing the ball, your body must not cover the point of contact between the ball and paddle. By hiding this contact, the server is able to disguise the serve illegally. Usually the player will leave the free arm (the one that tossed the ball) in front, covering the ball when it is struck. Please remove your free arm so the receiver can see the serve.

At a tournament, it is customary to shake the hands of the opponent, the umpire(s), and the opponent’s coach (as well as your own coach). This is the proper sign of respect.

See the Wang Liqin Integrity video for an example of true sportsmanship.

Before starting a match, it’s customary to have a structured warm-up with your opponent for 1-2 minutes.

Block for your opponent. Undoubtedly they’ll want to warm up their loop, so you need to passively block to let them do that. If you block it back too fast or keep smashing the ball back, they can’t comfortably warm up their strokes.

Typical flow. If you watch the pros play, they generally follow a structured flow as follows:

Forehand-to-forehand rally (30 seconds). Simply hit back and forth to your forehands (this assumes both of you are righties or lefties). These are regular counter hits, not loops.

One player starts looping (20 seconds). One player will start looping, and the other should block passively to allow them to loop comfortably.

Other player starts looping (20 seconds). The first player will stop looping and start to block back passively, this indicates that they’re done looping.

Repeat steps 1-3 but with the backhand.

When inspecting the opponent’s racket before your match, don’t touch the rubber on the playing surface (it’s okay to touch it at the bottom where the labeling is). Touching the surface transfers the oils on your fingers to the surface and degrades it, so many people will take offense, especially if you touch the middle or sweet spot.

If you can, just look at the rubber, don’t rub the surface. There’s not much to be gained from feeling the surface anyways. As long as you know whether it’s a grippy rubber or an anti-spin, you should be good to go.