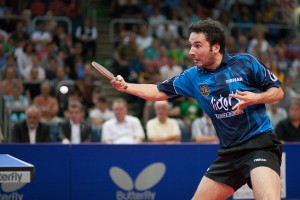 Tokic is world-ranked #69 by the ITTF. He was a bronze medalist in both singles and doubles at the 2011 European Championships and a competitor at the 2012 London Olympics. It’s rare that players of Tokic’s caliber compete in the U.S.

Tokic will conduct two 180-minute training sessions at the club starting 5:00 pm. We’ll have a brake after 90 mins and we’ll continue. He will be assisted by his girlfriend, Monika Molnar from Servia who herself is ranked #201 in the world for women , his dad Miroslav Tokic, Biljana Todorovic #191 and Martina Safran-Pohar ranked #248. Also, everyone will get to play briefly with Tokic himself.

For those that do not follow table tennis the name Bojan Tokic does not ring the bell. But for those crazy fanatics of the sport such as myself, the name was an immediate recognition. Bojan Tokic is Slovenia’s #1. His most impressive performances for me are his matches against Ma Long, Dimitrij Ovtcharov, Ryu Seung Min, Kalinikos Kreanga, and many others. In 2012 he reached his highest rank of 25th in the world.

Each session is limited to 8 players

Space is still available. If you’re interested, please let us know as soon as possible. Contact us or call us to 714-932-7611. We can only receive entries until Jun 28

So far we have available