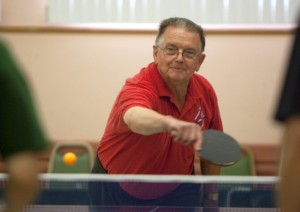 Table tennis and Alzheimer’s? These aren’t exactly two things you’d expect to see in the same sentence, but if you knew about the innovative Table Tennis Therapy Program used by the Sport and Art Educational Foundation in Los Angeles to benefit patients with early stage Alzheimer’s and other forms of dementia, you’d be less surprised.

Thinking that any of us can avoid Alzheimer’s, either in our own lives or in the lives of those close to us, would be a mistake. The oncoming epidemic of Alzheimer’s is now considered a national crisis that grows worse day by day. From 2010 to 2050, it is expected that cumulative care-taking costs for people with Alzheimer’s will exceed the staggering amount of $ 20 trillion dollars. Even more startling, Alzheimer’s is not simply a disease for the aged. It now has been found to affect patients as young in age as 35 years old. Clearly, there is no silver bullet for this rampant disease, and it’s also apparent that it can strike any one of us at any time.

Yet despite these grim facts, a Japanese clinical study conducted in 1997 showed some promise through utilizing table tennis as a rehabilitation activity for patients with different forms of brain disease. The study demonstrated that table tennis as an activity produced significant results in improved cognition, better balance, and served to further socialize patients suffering from these diseases that invariably also caused a sense of tremendous isolation and depression. The “table tennis therapy” experience, for many reasons, seemed to dramatically lessen these consequences.

Founded in 2007 by Michael Zaretsky and several associates as a non-profit 501(c)(3) organization, the Sport and Art Educational Foundation (SAEF) has been designed to provide unique Table Tennis Therapy Programs for seniors with early stage Alzheimer’s and other forms of brain disease and for developmentally disabled children as well. Starting in 2010, the SAEF began conducting its specialized program through the Gilbert Table Tennis facility in Los Angeles, and has now established separate outreach satellite programs at nine senior care centers in the community as well. The SAEF patients are warmly encouraged during their participation in the activity and are highly supervised by Certified SAEF Table Tennis Therapy Program Instructors who conduct the therapy program’s sessions.

Yana Mouradian, Vice-President of the SAEF, says, “It’s been determined that the activity of table tennis stimulates as many as five separate portions of the brain. After our clients participate in the program, it’s easy for us to see their attitude is brighter and their senses more aware. There’s no question it’s the world’s best brain sport.”

Michael Zaretsky, President of the SAEF adds, “We hope to have our formal program evaluation and its protocols completed by summer of this year. Our ultimate hope is through providing our unique SAEF programs to those who have lost so much through this tragic disease, we might return a sense of hope to them for a future that they may yet still own.”