Who is Ryu Seung-Min? 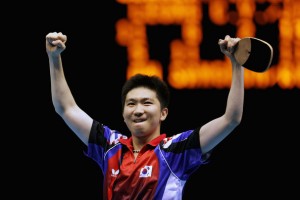 Ryu Seung-Min (born August 5, 1982 in Seoul, South Korea) is a Korean table tennis player who won the gold medal at the 2004 Summer Olympics in the men’s singles competition. His opponent was Wang Hao, a top-seeded player from Chinese national team. Along the way, he defeated 1992 Olympic champion Jan-Ove Waldner with 4-1. Ryu is ranked thirteenth in the world as of May 2011.

Ryu Seung-Min plays penhold style. Unlike players like Ma Lin and Wang Hao, Ryu practically never uses the backside of his blade. Ryu relies on his outstanding footwork, explosive forehand loops and drives to win points. For some time he used Xiom (South Korea) table tennis paddles and rubbers playing with his signature model “Ryu Seung Min Special” penhold and has been using ProZRSM ever since his victory at the 2004 Summer Olympics. Lately he switched again to Butterfly (Japan) equipment and now he uses their RSM ZLC blade with Tenergy 64 rubbers.