Warning: "continue" targeting switch is equivalent to "break". Did you mean to use "continue 2"? in /homepages/46/d426325437/htdocs/wp-content/themes/jupiter/framework/includes/minify/src/Minifier.php on line 227
 Rodrigo Tapia the unstoppable | Newport Beach Table Tennis Club 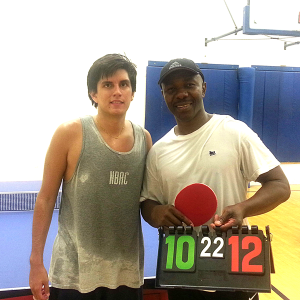 As you may know, Rodrigo was the Equal Challenge Champion for the last three Wednesdays, and last Wednesday he got his fourth title.

The Equal Challenge Tournament promotes the improvement between players, and Rodrigo played his best in every single match.

For his outstanding participation, Rodrigo received from our sponsors prize money of $100 plus what he won from the last four Wednesdays ($190).

This is the first time a player obtained the Equal Challenge Title four times in a row.

All of our participants know the challenge is hard for everyone, so the winner is a well~deserved champion, overcoming all obstacles.

What else happened last Wednesday?

Luis Crescitelli was the only player who beat Rodrigo Tapia with a score of 3-0.

Tim Stephens, despite all obstacles, won first place in his group.

Jeffrey Tsay won two sets from Luis Crescitelli, who was the winner in his group.

In the single elimination round, Ken Okey defeated Luis Crescitelli in the Semi Final 3-0, although all the sets were close.

The styles of table tennis are quite varied, and even a high-rated player can sometimes have problems with a lower rated player.  With that said, keep track of the varies styles and don’t give up and be sure to keep training!

We would like to extend an invitation for you to come and participate in the Equal Challenge Tournament each Wednesday.