Rodrigo Tapia Got a Sweet Second Victory at Newport Beach 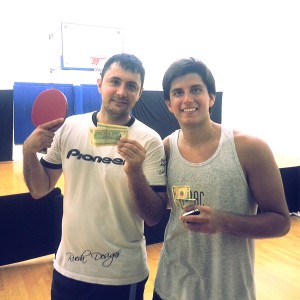 Is there anyone in Newport Beach or around the area who can stop Rodrigo Tapia this Wednesday?

So far it looks like Rodrigo has become unstoppable, so come and play table tennis in Newport Beach this Wednesday and challenge our current Champion. Remember that it doesn’t matter your level for you always have a chance to advance.

Wednesdays are made to play table tennis and that is what exactly happens at our club each week.

Twelve players with different skills and levels came to participate with one goal in common, and that was to win the “Equal Challenge Title”.  As you know our golden rule is that all table tennis players will play at least four matches.

Last Wednesday, several new visitors participated and we want to say thanks to all of them choosing to be a part of the Equal Challenge Tournament.

Also from nowhere our good friend Ryan Louie came to play, and if you don’t remember him, he was the unstoppable winner in one of our previous tournaments.  Alex Figueroa, a Colombian player, also decided to play and challenge his skills.

It was very nice for us watch William Graff Dad playing the Equal Challenge Tournament.  He was a fabulous soccer player when he was younger,  and is now playing table tennis in the same tournament with his son William Graff.  We are sure this will be a good memory for both of them.

Alex Figueroa, with his tricky serves, was the winner of the first group and was ready to play against the Ecuadorian National Player Rodrigo Tapia.

Alex missed a couple of serves and Rodrigo took advantage of those mistakes.  Ridrigo made great backhand blocks, and smashes from Alex were not enough to beat Rodrigo this time.  At the end, Rodrigo Tapia defeated Alex Figueroa with a convincing result (3-0).

Good luck next time Alex, and congratulations to Rodrigo Tapia!

See you on Wednesday TT Players!