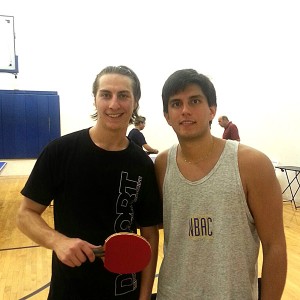 With great performances throughout the evening, Rodrigo Tapia showed us his skills on the table.  He knew the tournament would not be easy, but Rodrigo knew it would be an excellent challenge to improve his mental and tactical skills.

Last Wednesday was a very busy table tennis day.  Remember our golden rule that if you participate, you will get to play in at least four matches.

In the first stage, Rodrigo advanced with confidence, but in the second stage with a group of three players, he found a player who almost beat him: Ron Arellano.  Rodrigo used his strategy to win 3-2 after a good demonstration of top-spin rallies everywhere with both forehand and backhand shots.  Rodrigo then went on to win his second match to Moustafa Mahmoud, who had to quit playing for an emergency phone call. We hope all is well with Moustafa, who promised to come next Wednesday for revenge.

The last and final stage for the Equal Challenge Title was a group of three people:  William Graff, Luis Crescitelli and Rodrigo Tapia.  The powerful lefty Ecuadorian player got his first title with a victory of 3-0 over both William and Luis.

Rodrigo said:  “It’s a very interesting tournament, and I have to say the two times I have played has helped me to concentrate for a longer time right from the start”.

William Graff, an offensive table tennis player from Torrance, CA,  visited us and we appreciate all of his positive comments about the Equal Challenge Tournament.  Next Wednesday, he will be coming back to try for his first title, and all our players know that William has an excellent chance to win.

Please arrive before 7:00 pm for we don’t want to tell you that you cannot play because you were late. We enjoy your participation in our Tournament.  This Wednesday players from Westminster and Diamond Bar will be playing and all of them are rated over 2300.  Be sure to come early and sign up for the Equal Challenge Tournament and find out who will be the next Champion.  After all, it could be you!