Ecuador with Rodrigo Tapia Cause Upsets 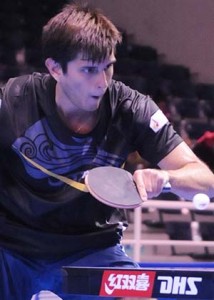 Who got the opportunity to play against Rodrigo knows his potential as table tennis player. We would like to share this note with you. Congratulations to the Ecuadorian Team!

However, of the leading four names; they were alone.

Argentina, Venezuela and Chile, the next three in the pecking order, all suffered defeats; Puerto Rico, Mexico and Ecuador caused the upsets, all three remained unbeaten, as against the odds they upset the seeding.

Man of the Moment

Brian Afanador and Hector Berrios excelled for Puerto Rico, Marcos Madrid was imperious for Mexico; whilst Alberto Miño remained unbeaten for Ecuador; but the man of the moment was the latter’s colleague, Rodrigo Tapia.

Geovanny Coello and Rodrigo Tapia had suffered a four games reverse at the hands of Manuel Moya and Alejandro Rodriguez (9-11, 11-7, 11-7, 12-10) and with Felipe Olivares, listed at over 300 players places higher than Rodrigo Tapia it seemed the contest had swung inexorably in favour of Chile.

Rodrigo Tapia had other ideas; against all expectations he beat Felipe Olivares in three straight games (11-9, 11-8, 11-4).

On the very next point, Rodrigo Tapia forced Felipe Olivares away from the table, top spin lob after top spin lob until eventually one return caught the edge of the table, un-returnable.

It was arguably the pivotal moment of the whole fixture. Rodrigo Tapia captured the next two games; the whole momentum of the match had changed.

“My coach told me I could win and that I must keep attacking”, explained Rodrigo Tapia. “He told me to serve short and spin the ball.” Rodrigo Tapia obeyed to the letter.

There is no player in the whole tournament who is mentally stronger than Alberto Miño, the young man I first met in 2006, when he only 15 years old and on duty for his country at the Liebherr World Team Championships in Bremen. He is the man you need when it is close.

Undoubtedly Rodrigo Tapia was the hero, Alberto Miño was the backbone; in the contest that saw Puerto Rico beat Argentina by three matches to two, it was the same scenario. Hector Barrios was the hero, Brian Afanador was the mainstay.

“Yes, no question, the win by Hector was absolutely vital”, reflected Eladio Afanador, the coach of the Puerto Rican Men’s Team and father of Brian. “Last year at the same stage Hector lost to Pablo and we lost the match; today to win, tremendous, I am so pleased.”

Puerto Rico now face Peru to determine first place in the group; earlier in the day with Gaston Alto, Pablo Tabachnik and Rodrigo Gilabert in action, Argentina had beaten the Peruvian trio of Joan Chavez, Diego Rodriguez and Julio Li by three matches to nil

Two dramatic wins, two dramatic upsets; the victory posted by Mexico over Venezuela did not possess the drama but it was an upset.

Venezuela made the better start with Marco Navas beating Salvador Uribe (11-7, 12-10, 11-7) but that was the end of the South American country’s success.

Success and they completed the opening day in style. Andres Avila replaced Luis Diaz in the line-up with a resounding three-nil win being posted against Uruguay’s Santiago Kacowicz, Mateo Wetzner and Gonzalo Lorenzotti.

Meanwhile in the Women’s Team event, Colombia and Chile, the respective third and fourth seeds, followed the suit of the two listed outfits, Brazil and Puerto Rico, who had duly topped their groups.

Colombia with Paula Medina, Cory Tella and Lady Ruano on duty overcame the Argentine trio of Ana Codina, Maia Harima and Camila Arguelles by three matches to nil; whilst Chile recorded a three-one win over Peru to bring their first phase matches to a conclusion.

Play in the Team events concludes on Wednesday 2nd April.