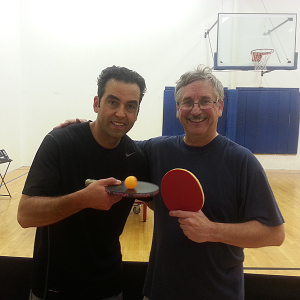 In the Newport Beach Table Tennis Club, you are going to always find challenging matches, without thinking in ratings or levels.

The mental strength improves when you as a player are under pressure.  This method will push you to always look for the right decision.

There are moments where we don’t know how to play the next ball without thinking in possibilities.  We are aware of everything but to receive the ball, and not to place the ball.

As your game skills increase, you have to make sure you mental strength increases as well, for if not, you become the typical ping-pong player who waits to make a point based on the mistakes of you opponent.  Thinking ahead of where you want to place the ball is the answer to get points based on your own efforts, and don’t forget the key word “Decision”.

Wednesday nights are made for the Equal Challenge Table Tennis Tournament and our participants love it!

Did you not show this week?  You are missing a lot of fun, and with exciting matches to watch.  We are the only weekly tournament with umpires.

With the participation of 14 players, the night started at the Newport Beach Table Tennis Club.

We want to welcome the new players:

We hope you enjoy our tournament, and we look forward to seeing you next week for the last Equal Challenge Tournament of the Year.  But do not worry for we’ll start again on Jan. 8, 2014.

Match Of The Night

Ray applied two spiny serves to Daniel’s backhand, getting the last two points, and with this Ray was in the final.

Congratulations Ray!  Now you have won two times in a row and you are closer to the Equal Challenge Progressive Jackpot of $142….just 2 more times!

Can Ray keep the title for the next week?  Come this Wednesday and challenge our latest Champion.

As a club, we wish the best to all the players from California in the US Nationals in Las Vegas.