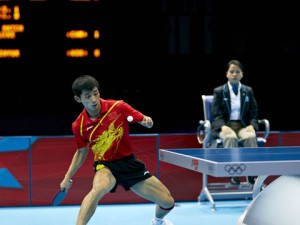 Well, it’s not only about paddle and balls…ping pong or table tennis involve strategy. By anticipating an opponent’s shot, a player uses the prefrontal cortex for strategic planning. Lastly, the aerobic exercise from the physical activity of the game stimulates the hippocampus, the part of the brain that is responsible for allowing us to form and retain long-term facts and events. Did you knew this?

“There’s a lot of strategy and the area that gets enhanced is the prefrontal cortex, critical not only in ping pong, but also in chess,” said Dr. Wendy Suzuki, professor of neuroscience and psychology at New York University.

That could explain why fellow panelist, Will Shortz, calls ping pong, “chess on steroids.” Since 1993, Shortz has been the man responsible for deciding just how much strategy is needed to solve crossword puzzles for The New York Times.

A self-confessed table tennis addict and puzzle editor, Shortz says the key to both of his favorite activities is strategy.

“Crosswords and table tennis go great together, they’re both mind sports,” he said.

Last November, 11-year-old Alex Lipan focused all of his attention on that bouncing ball to become the top-ranked table tennis player, for ages 12 and under, in the state of New York.

“You have to constantly change your method and see your opponent’s weaknesses,” he explained after the discussion, when visitors were invited to try their own strategies on ping pong tables set up inside the museum.

Lipan makes split-second decisions by anticipating the other player’s moves. By doing so, Dr. Suzuki believes that Alex is actively strengthening and changing the way his brain reacts, possibly affecting the response time of other decisions.

Suzuki shared her hypothesis about what could be happening inside the minds of players.

“Given the speed and strategy that they (ping pong players) are using, you can imagine that they have developed fast instincts,” she said.

If science one day proves a connection between table tennis and an increase in mental strength, ping pong could graduate from the basement to the classroom.