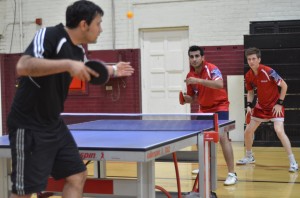 33-year-old Columbian player Alex Figueroa, on duty from Newport Beach Table Tennis Club, emerged as the most successful player on the concluding day of action at the Los Angeles Table Tennis Federation League in California on Friday September 28th.

Newport Beach Table Tennis team was tied 2-2 with the USC Team. On the last round, Alex Figueroa captured victory in the last match against Adam Bobrow from USC.

The day belonged to Newport Beach Table Tennis Club. On the final day of play, we had a friendly conversation about our strengths and weaknesses against the USC team. As a collaborative environment, we believe that it’s important to improve in competitive table tennis.

A Case of Nerves

“I do not feel that I played my best but I was glad to come out on top,” said Alex Figueroa after beating opponent Adam Bobrow in the final match. “I’ve played Adam several times and was aware of his very good services and lobs.”