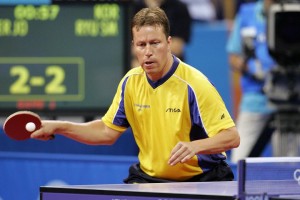 This a quick history of how Jan Ove Waldner become the Mozart of table tennis! Read and watch the video on the end. As you know China has powerful players until J.O Waldner won the final in China in front of 12,000 Chinese spectators.

He is the only one in the world who won a final in China versus China with the Sweden Team! Very impressive!

However, his desire to win is greater than usual. Losing is not a consideration! The motivation to win shows itself one morning when he starts playing darts.

He shouts: “I’ll show them! I’ll beat all of them!” The foundation of his whole life is expressed in this sentiment.

The Swedish Table Tennis Association invites the nine year old to a training camp in Örebro – a distance of 250 kms away from his home in Stockholm. Little Jan-Ove is unhappy to be so far away from home. At the end of the week his mother, Marianne, arrives to pick him up …unsuccessfully.

Jan-Ove informs his mother “A tournament is being staged here tomorrow. I do not want to miss that at any price”.

On the 5th October, three days after his 12th birthday, Jan-Ove makes his debut in the top division of the Swedish League. A few weeks later he wins his first singles match.

His unfortunate victim, Dennis Pettersson, loses to a boy who is only 140 cm tall (4 foot 8 inches) and asks his team mates “How can one beat someone one cannot see?”.

Jan-Ove Waldner visits China for the first time. The boy, who already has the reputation of a prodigy, plays in front of 12,000 enthusiastic spectators at the Shanghai Open. He experiences hard training for the first time in his life. The caretaker, of the hall in which he is practising, challenges him to a match and wins easily. Jan-Ove plays against many Chinese teenagers and loses many matches. Nevertheless, he learns from every encounter. He stores techniques, tactics and countless details in his brain. Deep in his subconscious mind burns the passion of this small boy: I’ll show them! I’ll beat the lot of them!”.

At the European Championships in Budapest, the sixteen year old defeats one of his heroes. On the way to the Final he beats the former World Champion Stellan Bengtsson as well as the local Star Tibor Klampar. At this stage Waldner is only ranked No. 30 in Europe. Despite this, he forces his countryman Mikael Appelgren to the brink of defeat in the Final. Waldner, the youngest European finalist of all time, leads 2-0 in sets but loses a very close match. Waldner, not Appelgren, becomes the centre of attention. The German National Trainer, Istvan Korpa, declares “I have never seen such a complete player at this age. He can beat everybody, including the Chinese. His perfect services, his impressive changes of speed, his ability to vary his game, will keep European coaches occupied for years to come. How can we find an answer?”.

Jan-Ove wins the European Top 12 in Bratislava for the first time. In the ensuing years he will win this European Ranking Tournament a further six times and will be runner-up four times – a record that will stand for eternity.

Sweden is defeated easily by China in the Team Final of the World Championships in New Delhi. Waldner had succumbed to a virus and had been confined to be with a 40° fever. The individual events began two days later. Waldner dragged himself to the table – and won. Having survived the early rounds, he played as if in a trance. In the quarter final against Chen Longcan and in the semi final against Teng Yi he knocked out China’s number two and three …and HOW! Never previously had anyone seen table tennis played to this high standard. Ki Enting, the 1973 Chinese World Champion, shook his head and asked: “How can one win against someone who attacks every ball and never misses?” Waldner led 1-0 and 9-3 in the final against World Champion Jiang Jialiang, but final victory eluded him. The 21 year old promised: “My time will come. I will have my revenge”.

Waldner keeps his promise. In Dortmund he becomes World Champion for the first time. The Chinese Team is outclassed, as Sweden secure a 5-0 victory in the final. Jan-Ove achieves his first singles title against his fellow countryman Jörgen Persson. Now Jan-Ove Waldner has become “the man to beat”.

Waldner is crowned Olympic Champion in Barcelona, and table tennis experts agree: “The man plays table tennis from a different planet”. Carl Gustaf, the Swedish King, is among the enthralled spectators who give Waldner a standing ovation. The greatest table tennis player of all time, Jan-Ove becomes a national hero on the same level as the legendary tennis player Björn Borg (now one of his best friends). Sweden had not won an Olympic Gold Medal in the summer games since the last war. This gives some indication of the quality of Waldner’s achievement.

A million strong army of Chinese athletes, as well as a new generation of European table tennis stars, endeavour to master the living legend Waldner. Jan-Ove defeats them all.

Blessed with an extraordinary ambition, he defends his position against all competition and setbacks to the present day.

In 1997, when it was no longer expected of him, he won his second World Singles title without dropping a single set. Once again a record that is unlikely to be broken.

In the year 2000 in Kuala Lumpur, Jan-Ove Waldner and the Swedish Team, classed as rank outsiders, won the World Team title for the fourth time. To put this victory into perspective, the Chinese players could well have been the grandsons of the players that Waldner had played against decades earlier.

Waldner’s triumphal progress in Athens, at almost 39 years of age, is perhaps the most surprising success in a long and glittering career. During more than twenty years as a World Class player Waldner has continued to develop his unique understanding of table tennis and perfected his playing technique in a quest for perfection…

We are proud of our association with Jan-Ove Waldner and look forward, with his many fans in the whole world, to discover what he might still achieve at the World Championships in Shanghai.

He did not win the 2004 Olympics but he won the spectators’ admiration and their hearts.

In China, the country of table tennis world champions, he is respectfully called “evergreen”. At the last Olympic games Jan-Ove Waldner again, impressively, showed them WHY. He is now 39 years old, but after his gold medal in Barcelona in 1992 and silver in Sydney in 2000, he once again reached the semi-final of the men’s singles and celebrated the comeback of the year. Again it was Waldner, clearly the best European, who defied Asian superiority. In Athens the table tennis genius was again the spectators’ favorite  Jan-Ove impressed with his unique touch. His play was full of invention. His well known variations of service, service returns, and topspin with both backhand and forehand, won him many points. Decisive 4:1 victories against the Chinese tournament favorite Ma Lin and the German star Timo Boll were the result. No one expected such a great performance after a soul destroying year of injury.

The following video is the final Jan Ove Waldner versus Liu Guoliang (Actual Chinese National Coach), I consider the second set is the real third ball attack…just check out and leave your comments!