How to keep the score on table tennis? 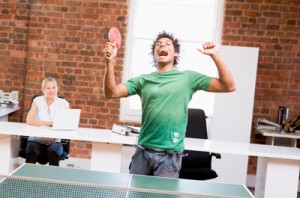 How to keep the score on table tennis?

For maximum fun, you will want to learn the basic rules of the game.

2. After deciding the serve, each player will serve TWO points each.

3. If a player serves a net ball (called a ‘let serve’), the point is replayed. (There are no limits to the number of let serves a player may serve.)

4. The server in singles can serve anywhere: short, long, straight, or cross-court. Only in doubles do you have to serve diagonally from your right court to the opponent’s right court.

5. If you volley the ball while it is still above the table surface, you lose the point.

6. If you move the table, or touch it with your free hand, during the rally, you lose the point.

7. If a you or your clothing touches the net or post during the rally, you lose the point.

8. If you hit the ball twice in succession, you lose the point.

9. If your shot hits a wall, the ceiling, or misses the opponent’s side of the table, you lose the point.

10. Change ends of the table after each game.

12. After the first player scores the 5th point in the final game of the match, change ends. If you forgot to change at 5, then change as soon as you realize it.

13. If your opponent distracts you by talking or yelling while the ball is in play, play a let.

15. Shake hands after every match to show good sportsmanship.

1. Use quality equipment whenever possible. Sandpaper paddles are illegal because they damage the ball. Visit our Newport Beach Table Tennis Store to get professional Equipment

2. Try the new 40mm balls. They slow the game down, add to the length of the rallies, and are easier to see.

4. Learn the proper strokes. Avoid the temptation to just smash every ball you can. If you would like to learn a proper technique contact us, and make an appointment for your private or group table tennis lesson in the City of Newport Beach.

5. Once you become the neighborhood champ, it is time to visit and play the Equal Challenge Tournament, the only table tennis handicap tournament on the City of Newport Beach.