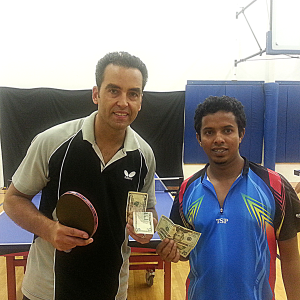 Table Tennis is a universal language throughout the world.  If you go to Spain not knowing Spanish, it becomes an issue.  However, if you go to visit a club, you will make friends, learn spanish, including those words you say when you miss a highball.  In fact, those most likely will be the first ones you learn.

The Equal Challenge Tournament is becoming the largest table tennis tournament in the city of Newport Beach.  If you have Facebook, Like Us, and if you have Twitter, Follow Us.  If you prefer to receive the news to your inbox, then subscribe to our blog.

Did you know the Equal Challenge is the only table tennis tournament where you have umpires from the start?  This allows you to focus 100% on your game.

Did you hear about the Equal Challenge Progressive Jackpot?

Nirmala Jayasinghe, who is the #1 rated player in Sri Lanka and is the official coach of Shivan Kumarlast, has an estimated rating of 2450 in the US and is the latest winner of the Equal Challenge Tournament.

With some tricky serves he won many points against his opponents.  He is a fast player with a great 3rd ball attack.  Be careful as you receive his serves for he will loop the next ball down the line.

The final match was between Ray Shak and Nirmala.

Ray had some problems receiving Nirmala’s serves in the first set.  In the second set Ray got used to his serves, and as soon as he did that, Nirmala started developing his game by looping with his forehand, although Ray is well known for his block.  However, at the end Nirmala overcame Ray with a score of 11-8, 11-9, and 11-9.

This was the second Equal Challenge final for Ray and for Nirmala, it was his first final with a positive result.

Congratulations Nirmala and we will see you next Wednesday for more Table Tennis!