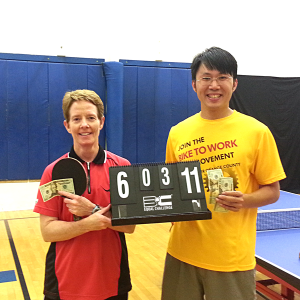 As you know, the Equal Challenge gives beginning players a unique advantage against their more experienced competitors. Our custom points system allows beginners to advance confidently in the sport of table tennis, while at the same time giving seasoned pros the opportunity to improve their skills. This is an excellent and unique method for new students to gauge their aptitude, build confidence and focus on progress.

How hard it is for us to complete the long awaited 11 to win the set.  It becomes a real challenge especially if you don’t practice those moments.

“I love the way you guys set up the scenario to play the Equal Challenge, umpires, scores, similar to an official tournament.  It’s very close to the real competition, and each game is a challenge to take and that’s what we need as players”, said Lisa.

Fafa Liao, a new table tennis player born in Taiwan and now living in Irvine, came to challenge his skills on table #1.  From the beginning of the first match, he played very well, winning 3-0 with all his contenders in a group of five people.  This was an indicator that he was ready to keep advancing to the next round.  James Kim qualified for second place in his group.

On table #2, Luis Crescitelli, our champion last week, showed us of what he is made by qualifying for first place in his group.  Steven Manley qualified in second place losing just one match in his group.

On table #3, Lisa Schrader qualified for first place, losing  just one match versus Ken Okey, who qualified for second place in his group.

Semifinal, Game of the night

Lisa Schrader played against Luis Crescitelli, showing spectacular attack shots with aggressive counter attacks from the other side by Luis, who had a spinny and aggressive backhand that surprised her.

In this game we saw many good serves from both of them, where underspin shots was a word not included in their dictionary.  After the first opening shot, the rally started from side to side.  If you check the picture below you can see how tight was the match.

We are glad we captured this image.   Congratulations to both of you.  It was a awesome match!

In table # 2, Fafa Liao played against Ken Okey and Ken lost 0-3 against Fafa who was ready to play in the final.

Lisa started with an aggressive attack and Fafa was ready to block her spinny loop.  Lisa was very surprised  by the way Fafa blocked.

Fafa started little by little changing the phase of his game, becoming confident in his penholder shots, and showing the spectators his counter-attack skills.

In the second set Lisa was losing 3-10 and came back all the way to 9-10, and then it was her turn to serve. Lisa applied the 3rd ball attack but she missed and lost the set.

In the third set, Fafa figured out how to get more points from Lisa, finalizing the game with a score of 3-0.

After the match, like good table tennis players,  they shake hands and Fafa Liao becomes the New Equal Challenge Champion this week.

Congratulations Fafa!   You are now eligible for the Equal Challenge Progressive Jackpot next Wednesday at 7:00 pm.