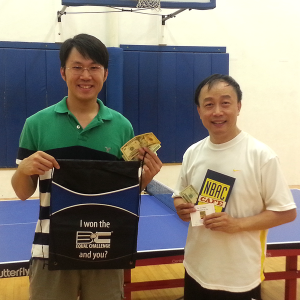 The Equal Challenge Tournament keeps rocking with the participation of 16 players, so isn’t it time for you to come and challenge your skills?  Certainly, I think…it’s time!

With a golden rule of a minimum of four matches,  your trip to the Newport Beach Table Tennis Club will work just fine.

Also, if you decide to come early, you can enjoy a healthy dinner with a fresh home-made smoothie at the NBAC Café.  You have to try it and see why local residents choose this place.  Don’t take our word…come and then tell us what you think.

Thanks to our sponsor, the Newport Beach Athletic Club, winners receive a FREE day pass to enjoy all the amenities on the gym.  Click here to see all that our champion Fafa Liao will enjoy for his victory last week.

Thanks to all these new young players who participated Wednesday,  and we are sure they will keep coming for a victory in the future!

With two groups of five players and one group of six players, the Equal Challenge Tournament began!

On table #1, Jacob Castro defeated Lisa Schrader (3-1) and the effort of both players went to the maximum. They really had a great table tennis battle, and Jacob surprised Lisa with forehand smash shots after Lisa loops.  Every point was intense and it was an excellent performance for both players.  The best of all is that this match will help both of them to be mentally stronger.

On table #2, the six year old Angélica Arellano defeated Atila Ucar (3-1) and it was a great match for both of them.  Atila was surprised how the little girl made under-spin serves that won points.  Atila had a  hard time reading Angélica serves.  Congratulation Angélica for your first victory!

Our good friend Tony Su got a challenging match against our future Over-80 US National Champion Ken Dewhirst.  “The placement shots of Ken were great for his age, he is not afraid to attack, and it was a great match!”, said Tony.

On table #3 we got two great matches.

The first one was between very good friends Ryan Brennan and Josh Bissonette (3-2).  Most of the time they play one another, so it was a close match.

The second match was intense between Fafa Liao and Danny Moreno and this was the first time they played one another.  Strong loops from Danny and great blocks to the corners from Fafa made this match one of our favorites.  Danny was very close to victory, but in the end Fafa took control with a score of 3-1.  Next time Danny and keep up the good practice!

Newport Beach Table Tennis Club says thanks to all the players who collaborate as umpires, as this is the best way to make even more real the competition.  As soon as you play an official tournament you will not feel nearly as much pressure. 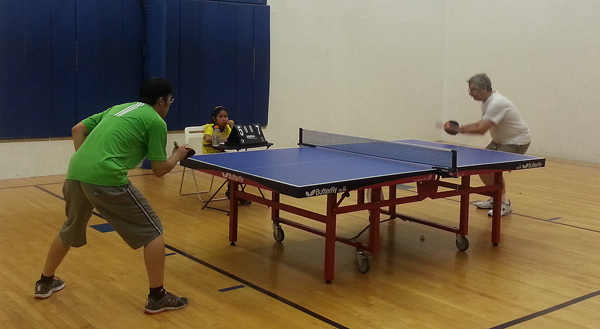 With the winners of each group forming one last group of three players to start the challenge, the final was between

With this result Fafa Liao defended his Title, and now Fafa is closer to getting the Equal Challenge Progressive Jackpot.  Do you think he can win for the 3th time?

We can see it next Wednesday at 7:00 pm and we hope to see you there!