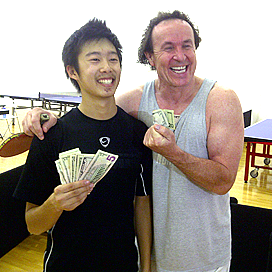 In the most dramatic of circumstances, Poland’s 54-year-old Roman Machutt won the Equal Challenge Tournament title at the Newport Beach Table Tennis Club on Friday November 2, 2012. Machutt won against 18-year-old Ryan Louie by a narrow margin in a nail-biting fifth game. During the course of the finale, Louie did everything right, maintaining his composure and keeping the pressure on Machutt.

It was quite incredulous when, in the deciding fifth game, Machutt looked as though he going to have to be the bridesmaid. He trailed 7-9, leveled and then played with the utmost discipline, securing victory with a final score of 3-11, 11-9, 8-11, 15-17, 9-11.

After the edge-of-your-seat match, we talked with Machutt about his training. “I play with Tom and Hilton,” said Machutt, “and now I can tell them I’m the CHAMPION. The final match was not easy and I almost lost to Ryan, who is a very talented player. From this experience I learned a lot, and I’m sure this will give more weapons to beat my friends during the week again! I hope they can play in this tournament, as this is the kind of competition where you really know who is the champion!”

Louie, an old friend from Irvine, came to visit us and brought along his dad, Ernie. If you happen to play against the younger Louie, be warned. He has been developing a strong and very effective loop to embarrass anyone. It’s the fastest loop in City of Irvine!

The Louie Family are one of the most friendly people I have met. Keep up the training Ryan! You are playing great! 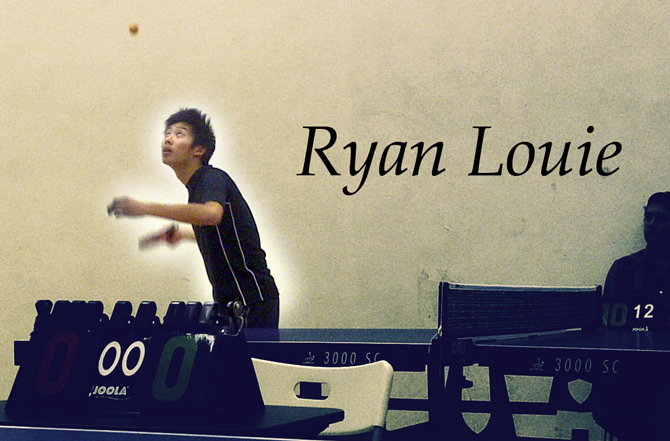