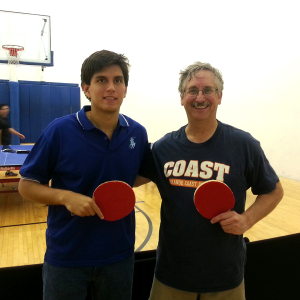 Coincidence and lucky are words which do not fit the Table Tennis Equal Challenge Tournament in Newport Beach.  Dedication, effort and training are what Tim Stephens has been doing for the last 4 months.

In a group of 6, whoever wins the most matches is the winner, but what if we receive a visit from a National Table Tennis Player?

To be a national player from anywhere means you have a lot of training, experience, and technique to conquest any and all titles.  And a national player keeps training hard until his or her goals are achieved.

Tim Stephens and his best match

Tim won his first four matches, but the difficult one was against the National player from Ecuador who is rated 2418 in the USA and is #3 in Ecuador.  Tim Stephens was very focused on each of his decisions, and he knew that the match against Rodrigo would not be easy.

Rodrigo, with a great performance, showed Tim strong topspins, spin serves and quality shots that surprised Tim.  As the match progressed Tim started to understand the game of Rodrigo.  Many of you would think it is easy to win if one has many points to receive an advantage.

We saw the match and it was very intense for both of them.

The score was 2-2 in sets and then in the fifth set, there was a score of 10-8 in favor of Tim.  Rodrigo makes a serve and loops very deep to Tim’s forehand, which is blocked, and Rodrigo makes a backhand loop to Tim’s backhand.  The score now is 10-9.  Then a top spin serve from Rodrigo, and Tim makes the wrong decision, trying to push the ball back.  At this moment all looks favorable to make a 10-10 easy score for Rodrigo.  But guess what? Rodrigo misses the high ball.

With this result Tim Stephens became the new Equal Challenge Champion of the week.

See you next Wednesday at 7:00 pm in Newport Beach Table Tennis Club for more matches like this.  Rodrigo Tapia from the Ecuador National Team will play again and if you would like to challenge him,  be sure to come by.