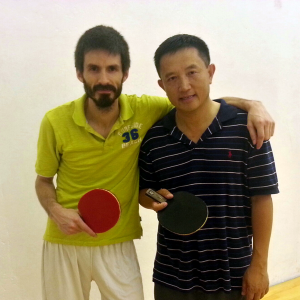 The 3 main ingredients of a unique table tennis tournament, the “Equal Challenge”

Last Wednesday was crowd, different levels but all with equal opportunities.

3 new players came to the challenge this Wednesday night

Benjamin play with a Sandpaper racket surprise many players on Newport Beach, even the old Equal Challenge Champions.

Blake play with a racket very similar to Sandpaper, and he got a great experience playing with so many styles.

This time the final was a group of 3 players

The first match Roman versus Xuan, with a very tight score in the 5th set…Xuan won 12-10

The second match Roman vs Ron, this time Roman did not play his match for injury.

The Last Equal Challenge Match of the night

The pressure of game start from 0-2, in all the sets

Ron notice that, and he change his tactic right away.

At the end Ron won for a minimum difference of 3-2 to Xuan Liu a pen-holder player with short pips on his fore-hand and inverted rubber on his backhand.

“I almost beat Ron, but he got me on the last moment…next time!” Xuan said

We want to say thanks to everybody to help us with the tables, nets, and even umpiring the matches!

As you know table tennis events will not be the same without an umpire. We want to make sure you play 100% focus on your game.