Equal Challenge was made for Ken Okey 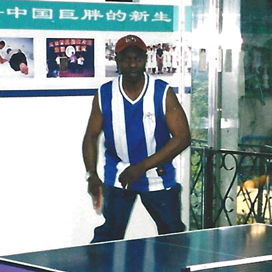 The Equal Challenge Tournament is designed for all table tennis players in the world and this time Ken Okey was the victor!

An African player with a dangerous backhand attach and a lobbing style won the Equal Challenge Tournament in the City of Newport Beach. Keg got two great matches against Joe and Tim.

Tim applied all his resources for this match, including his powerful forehand smash, but apparently Ken is very used to this style, Tim hits the ball 2 to 3 times on the Road, and Ken finds an answer for these attacks. Tim misses on the four ball smash, giving the advantage to Ken. At the end of the match both players shake hands talking about the skills of each other.

Competition that’s what Joe is looking for! Well, Joe found a wall when he played against Ken.

Joe was placing the ball on all the corners, and Ken got most of them.  When the balls came to Joe, he was thinking of victory already, but because the ball is high, Joe ends up losing the point! Most of us probably know this, but in the moment that the adrenaline is active, we think victory is ours right away.

At the end Joe was leading but sadly he misses the last four points, giving the title of Equal Challenge Champion to Ken

This Wednesday we’ll be playing with more warriors and we are missing you!  If you have not tried our Equal Challenge Tournament, then perhaps this week is your turn.  Stop by and enjoy our table tennis tournament in the city of Newport Beach!

See you on Wednesday TT Players!