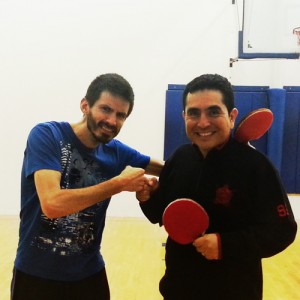 A tournament for all the ages and levels

Last Wednesday on the Equal Challenge Tournament we got very interesting matches. It was fun to watch table tennis warriors fighting for 1 point.

Ken Dewhirst play against Cesar Beraún in tight match, as you know when you are in a 9-9 anything can happen.

An edge, a net, a missing serve, a missing smash, muscles are tense and we just try to place the ball safe as possible or if we are advance players we look for the opportunity to add some top-spin.

The game between these warriors was not the exception, both of them looking for victory.

The final score was 3-2 in favor of Cesar.

A very interesting match was between Luis Borges and Ken Dewhirst. Luis try to place the ball far as possible from his opponent, but Ken most of the time was there.

In this match, the 3rd ball attack was the opening shots for both of them. At the end Ken got the victory.

Cesar Beraún from Peru and Ron Arellano from Ecuador won all the matches, until both of them play one to each other.

Wondering who won? Well check out the following video and discovery who was the Equal Challenge Champion of last week