Doug Jackson Is The Winner Of The Equal Challenge Tournament 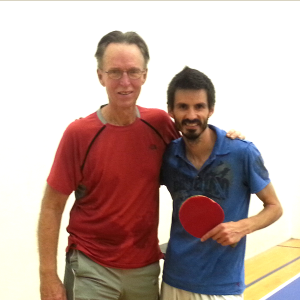 This night we got 11 table tennis players playing, all of them with the same desire to win the Equal Challenge Tournament

We make two groups of 4 players and one group of 3 player, the best of each group will advance to the next round. A round Robbin between the best ones from each group

After make a sets summation and following the ITTF rule, the tonight champion is Doug Jackson. Congratulations! We are still offering the Equal Challenge Progressive Jack of $302. Can Doug become champion again next week? Come , play and find out!

If you miss it this time, it’s ok! You can come any Wednesday at 6:30 pm to play our Tournament, after all we want to make sure you give your best in each individual match.

We want to encourage any table tennis around the area to play the largest table tennis tournament in Newport Beach. We guarantee you will be playing at least 3 matches.

See you next week!