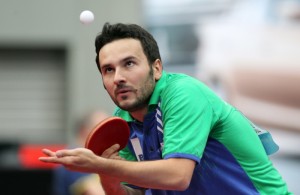 Tokič’s first competition was in Montpellier, France where he won the ETTU Cup. Via Cagliari, Italy and Ljubljana, Slovenia he transferred to SV Plüderhausen, Germany in the 2000/2001 season.

He then went back to Slovenia to work within a training group, with which he stayed for three years. In 2003, he returned to Germany to play for TTC Frickenhausen. In 2005/2006, he won the ETTU Cup, the DTTB Cup and the German League with the TTC Frickenhausen.

In the 2007 European Championships he reached the quarter finals in the men’s singles competition. Tokič has participated on 2008 Summer Olympics in Beijing, China and the 2009 World Table Tennis Championships in Yokohama, Japan. In 2010 Tokič attended the 2010 Slovenian Open international table tennis tournament.

In October 2011 he won a bronze medal in both the Singles and Doubles competitions of the 2011 European Championships. Tokič is being sponsored by the company Tibhar.

Tokic is totally honest and sincere; at the Qatar Open he gave all his prize money to the Sandra Paovic Fund. Table tennis is richer for the likes of Bojan Tokic and he beat a man of similar ilk. Last year Ryu Seung Min gave $10,000 to the earthquake fund in southern China.

If you didn’t see this match I really suggest you to watch it and see what kind of player we are writing about. This game was against the Chinese National Player Ma Long #1 in that time in Rotterdam – Netherlands in the World Table Tennis Championship 2011.